When Specialized first unveiled the Power saddle I immediately dismissed it as one that wouldn't work for me. When riding I like to switch between sitting on the rearward half of the saddle, and riding on the rivet. However, when a friend offered to lend me his S-Works power to try I was curious. Now having ridden it for a few months I like it so much I'm not giving it back.

First things first, setting up the Power is quite different to other saddles. I've always positioned my (Selle Italia SLR) saddles so the nose is always a fixed distance behind the bottom bracket, but this won't work when using the Power. Instead, I've found that a better guide is the position where the saddle transitions from 'straight' to curved. My experience suggests that placing the Power so the curved section aligned with an SLR resulted in an agreeable position. The picture below demonstrates how I set the Power in relation to an SLR (apologies for the dirty saddle - I swear I obtained it in that condition). 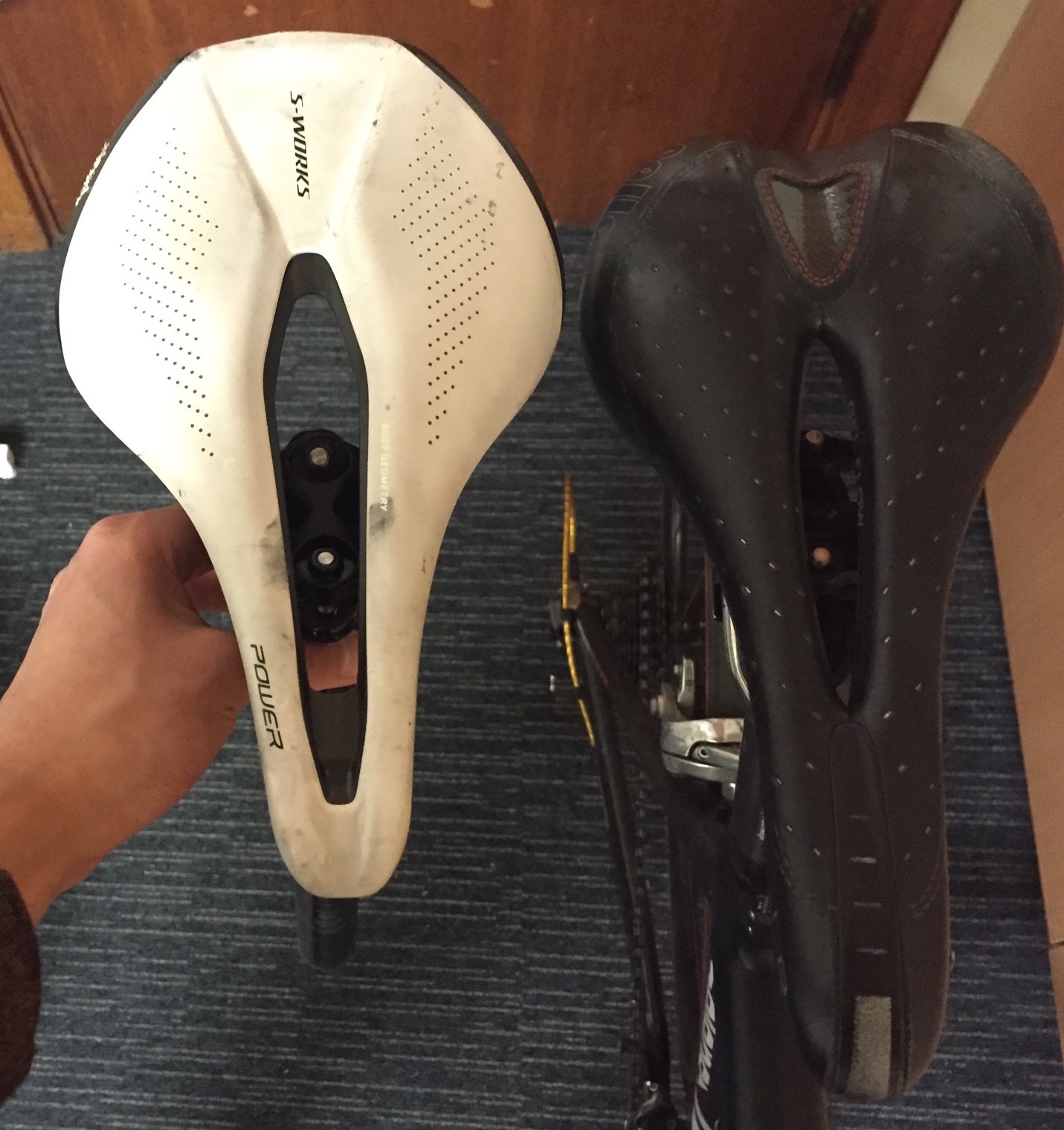 Specialized recommend increasing your setback by 3cm when using the Power. I found this recommendation vague, though useful. It is true that my setback increased by around 3cm (it's a little under 3cm), so it's a useful figure to start with, however I found more fine tuning was necessary. Perhaps changing from another Specialized branded saddle requires 3cm, but in relation to an SLR I discovered that aligning the 'maximum curvature' zone to be more practical.

It is true that I'm not able to slide forward on the Power, but after extensive riding I haven't found this to be an issue. It's not that I've got the saddle slammed forward, in fact my installation actually biases the rearward position. I'm not quite sure why I don't miss the sitting on the nose, but one hypothesis is that I didn't really 'need' to slide forward, rather it was just a bad habit. Now that I don't have the option of sliding forward I can focus more on actually getting the power out, rather than moving into a position where I think I'm getting the power out.

In terms of what the Power feels like on the road, it is surprisingly similar to the Selle Italia SLR gel flow saddle (albeit with no nose to sit on). visually, the radius of curvature of both saddles is similar, though the Power is slightly wider (143mm vs 132mm) and shorter (~250mm vs ~270mm). The Power definitely feels supportive and encourages you to hold yourself steady in the saddle, minimising any rocking you may have. The Pro and S-Works model saddles are a little firmer than my SLR, but Specialized offer Expert and Comp level saddles which feature (slightly) softer padding. I personally preferred the firmer saddle (more on this later).

Despite being a new product the Power comes in 4 distinct models, with a Comp, Expert, Pro and S-Works model being available. 'Distinct' is a little misleading since the Comp/Expert and Pro/S-Works share the same shell/padding but differ in terms of rail material (so really 2 distinct models each with 2 rail options). I've been lucky enough to test both the S-Works and Pro model and I would suggest that both feel identical. If weight were of no concern I would save the money and buy the Pro model.

Speaking of weight, the Pro model weighs in at 211g according to my kitchen scales. I'm a little disappointed by the weight, my old SLR kit carbino saddles were around 135g and even the lower end SLR xp saddles were ~180g, both lighter than the Pro and S-Works model saddles. The inner weightweenie doesn't like the saddle, but it's proved itself over the last 6000km of training and racing. If pricing was more competitive I would have this saddle on all of my bikes. 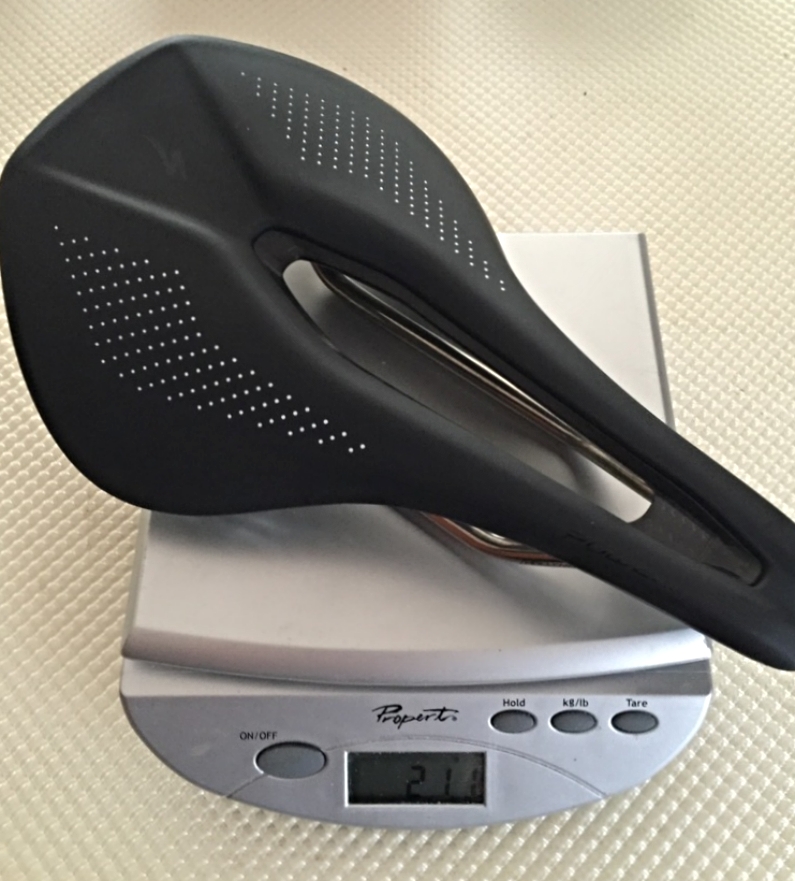 Why don't I think the pricing is competitive? The cheaper Comp and Expert models (despite sharing the same name) are actually very different saddles. If you view them in person, it's obvious that they are much more heavily padded than the Pro/S-Works models, and I believe one of the major reasons why the design of this saddle works is the low profile padding. I find less to be more since less padding often provides greater support, rather than that uncomfortable 'squishy' feeling you get from softer, thicker padding. In essence, the cheapest (and only) Power I would consider would be the Pro model. The Comp and Expert simply don't offer the same support as the Pro.

Now obviously I'm not suggesting that the Power will work for everyone, I'm more recounting  my experiences and opinions. The only way to know for sure would be to try it yourself. If you like the (old) SLR range of saddles, and dislike the Fi:zi:k snake and chameleon range, then (based on my experience) I would definitely give the Power range a test ride.

Saddles are not a one size fits all item, but I wouldn't be surprised to see the Power saddles feature on more Specialized sponsored teams as time progresses. Despite only two width options being available for the S-Works/Pro models at the time of writing (143mm and 155mm ), I would argue that one of the two options should suit most riders. Just like their insoles, where there are only three options, compared to 3025 possible combinations offered by some competitors (see G8 Performance Insoles), most people seem to get on fine with a 'stock' option.