A few days ago (31st of January) the inaugural elite women's Cadel Evans Great Ocean Road Race was contested. The 116km race was hard fought, with strong winds testing the legs of the elite women. A quality field of 67 started the race, with Rachel Neylan attacking a reduced peloton in the final 8km to take a solo win. After the race, I caught up with Stacey Riedel, a member of team USG to have a chat about the race. 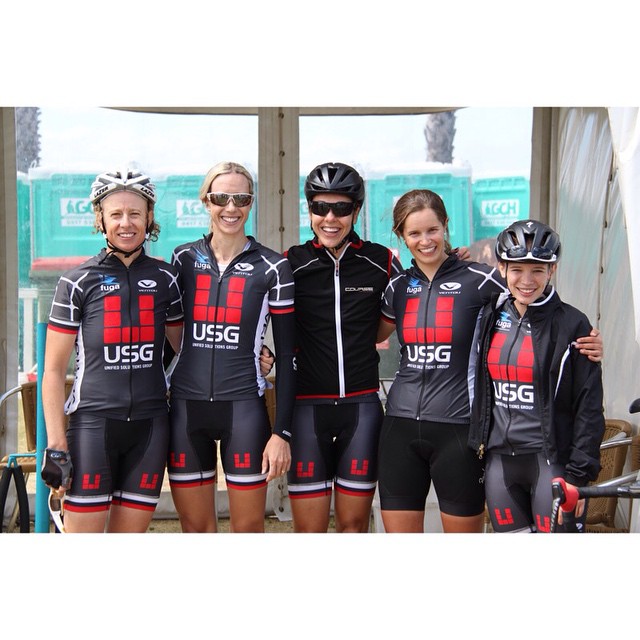 She tells me a story of hanging on for dear life. This is how the race unfolded for her:

With a top quality field, aggressive teams, high winds, and a tough course, the Cadel Evans Great Ocean Road Race was bound to be a tough one - and that it was! We rolled out in what was to be a ‘neutral’ section, but involved some jostling for positions to avoid dodgy corners and traffic islands. I made sure I was near the front so I could stay out of trouble and be in a good position for any inevitable attacks.

After about 10kms I moved to the very front of the bunch, and just like that, there was an attack launched from the ORICA girls. The gutter action begun, other riders started chopping wheels for the best positions to stay out of the strong winds. I rode as hard as I could to stay in a good position. The girls were still driving it on the front and everyone was on edge and scrambling for positions. The field was strung out in one big line. My legs and lungs were burning. I was riding as hard as I could just to hold the wheel. 16kms into the race, bang! I heard the awful sound of brakes screeching, bikes piling up and bodies hitting the ground. There was a massive crash just behind me. A lot of girls went down. I hope none of my team mates were involved.

The crash stirred things up and riders were scattered everywhere. A few girls in front of me started dropping the wheel. I need to move up, but the wind is too strong, I can't bridge the gap. I keep riding, in my drops, big gear, almost chewing my headstem just to try and keep contact with the bunch. I catch 2 other girls and we start working together. As the first few cars of the convoy pass I sprint to get behind them but they accelerate too quickly and I’m by myself again. I can still see the bunch ahead, but I can’t bridge the gap.

My team car finally comes past and slows down just enough for me to get on the back. One of my teammates is there as well. A moment of relief. I’m on the rivet, chasing hard to get back to the bunch. We are straying too far behind and a commissaire tells our DS he needs to move up to the convoy. He accelerates, I get out the saddle in an effort to stay with the car. The other girls who were behind the car are long gone.

I press on. I’m in a big gear and have a good rhythm, even though I’m suffering. Suddenly, the car eases off. We’ve caught up to the convoy! I jump to the next car, and the next, and the next. After all that hard chasing, I finally reach the bunch again. It’s the 2nd bunch, the strong winds and high pace split the field, but I’m back in the race. Our group works well together, everyone is rolling through taking turns. We are diagonal across the road, forming one big echelon. I try to stay out of the wind as much as possible, but keep taking turns to help try and catch the front group. No one likes someone who sits on. The wind is so strong, I’m being blown sideways and having to tense my body and grip my handlebars to stay upright. We are riding along the coast now and the wind is blowing off the shore. ‘Just keep rolling through, stay protected, do your bit’ I’m telling myself. We keep riding. Everyone is struggling.

We turn right and the BMC mens team are standing on the corner cheering us on. A little bit of extra motivation. There is a bit of confusion after the corner. Some girls are saying to roll to the left, some are saying to the right. It takes a while, but we get back into rhythm and are chasing again. We're still 5 minutes down. It goes on  for a while, echelon, rolling turns, strong winds, suffering.

The start of the QOM. I am really hurting, my breathing is getting bad. I need to calm down. I’m at the back of the group, trying to hold the wheel. It gets steeper, and I get dropped.   I keep my own pace, trying to get into a rhythm and control my breathing. It flattens out. I change into a bigger gear and push harder in the flat section and get myself onto the back of the bunch again. Then it kicks up. 500m to go, and I’m climbing as well as I can, but I get dropped again. I get to the top and my team car comes up beside me and we exchange bidons - empty for full. I work my way back onto the bunch, they have slowed at the top, sorting themselves out with water.

Now the course starts to get lumpy. A small decent, I wish it went longer. We go up again. Each rise, I force myself to hang on. I’m hurting bad, we're 75km in. Normally a race would be finished about now. Up and down up and down. I miss out a few turns. I can’t afford to keep doing work on the front or I’ll be dropped for good.

There’s another big climb. I’m hanging on the back but half way up I can’t hang on anymore. I drop back a long way. Convoy cars pass me, and I see my team car. Our manager and DS encourage me. ‘Keep going Stace. Get back on’ I sit in behind the car and work my way to the top of the hill. I get back to the bunch, but theres another hill. I’m dropped again. Cars pass. I jump onto the cars and try and use the convoy. I take some deep breaths and go for it again. I jump from car to car and chase my way back to the bunch. I can't keep doing this. I have to stay with the bunch.

I can't. I’m pushing myself so much. There are some steep hills now and I’m done. I’m exhausted. I battle just to get over them. Cars keep passing me and eventually I’m at the back of the convoy. My team car stays with me as I’m the first one in my team.  Now it’s just getting through. Not far to go now. Their encouragement really helps me. I’m going a lot faster than I would be without their support. I’m glad; the faster I go, the quicker I finish the race!  The last 4kms and I just hold a tempo to get to the finish line. The atmosphere is incredible. Such big crowds and so much support from them, something you don't normally get in women’s racing. I cross the line, and that becomes the longest race I have ever done - 116kms of suffering.

Stacey ended up finishing 15 minutes behind the winner. After hearing her ordeal I asked her what she thought about this style of racing, to which she replied

So there we have it. Hope you enjoyed the read. I'm looking to cover more and more of the local women's racing, in a similar fashion. If you have any critiques or general comments let me know below.