Campagnolo Centaur has been reintroduced by campagnolo as their entry level 11 speed groupset. While it doesn't feature the more exotic materials of Campy's more expensive offerings, there are still plenty of features which have me excited.

First the new four arm crankset features an ultra-torque axle. Campy appear to have abandoned power-torque and have released an aluminium ultra-torque crankset. While the ultra-torque design does carry a weight penalty (claimed 875g for compact 170mm cranks) it is much easier to remove than the older power torque design. Though Campy made some improvements with their latest power torque (found on the first release of Potenza) it appears as though Campy are looking to stick to ultra-torque, a welcome move in my books. 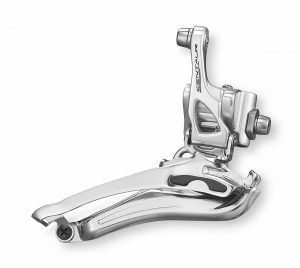 Next on the list is the new front derailleur design, which takes cues from the higher end groupsets. The longer lever arm and steel cage borrows directly from the Revolution 11+ technology of Campy's higher end groups. However, the rear derailleur does not 'embrace' the newer geometry of SR/Record/Chorus, instead sticking to a more traditional (but updated) design. What this means is that the RD angle doesn't change across the cassette (like SR/Record/Chorus) but instead remains constant, simplifying the rear mech.

Also released was an updated Scirocco wheelset. The new wheels are 35mm deep, 17mm wide and have a claimed weight of 1654g (w/o skewers). If the wheels hit the claimed weight and are comparable in (market) price to the current Scirocco H35 wheels then I'd imagine they'd be a popular option. Arguably, these wheels have much better dimensions for wider tyres than Shimano's RS81-C35 and Dura Ace C40 (assuming Shimano are sticking to the older 'C35' profile for the new C40).

Finally, the brakes, levers, cassette and chain are (mostly) what you would expect. Campy continues to use power-shift with the EPS like thumb shifter. While not ultra-shift, it does the job, and the thumb shifter is arguably more ergonomic. Moving on from the shifters, the cassette is only available in 11-29, 11-32, 12-32, and the crankset is only available in 50/34 and 52/36 chainring options. Initially, I thought this would be crippling, but then looking at my own gearing choices, I'd be perfectly happy with the 52/36 and 11-29 (I run a (not recommended) 53/36 with 11-28). I'd be gaining a lower gear but losing a little on my highest gear. 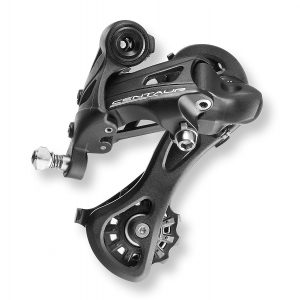 Some websites are labeling this groupset as a SRAM Rival and Shimano 105 challenger, though I think that's a little unfair. At least with Shimano, every time I use their 105 groupset I can't escape the feeling that it's just a cheaper version of Ultegra. It doesn't offer anything more, apart from a cheaper price point. Campagnolo Centaur on the other hand, offers a well thought out groupset which offers privateers a wide gearing range. It's not Potenza trickled down with cheaper materials, but rather a distinct groupset designed with a purpose: To serve a budget orientated privateer.